In Tribute to Andrea Harris 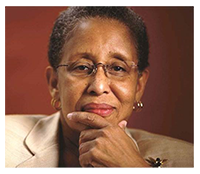 The news of Andrea Harris’ death spread quickly and widely. Born in 1948 she passed over on May 20, 2020. In the days since she died, her life is being celebrated by so many - personal friends, professional colleagues and a loving family. I join with all those who have expressed their love and admiration to add mine.

In addition to the many things she achieved, provided leadership for, and committed her life to, she joined with early supporters in 1991 to help establish the North Carolina Center for Nonprofits. Andrea was a founding member on its Board of Directors. When asked about Andrea’s involvement, Jane Kendall, founder of the Center said, “Andrea said yes immediately to being a founding board member of the Center. She helped create the vision for it and participated behind the scenes ever since – speaking at policy forums, lobbying legislators, and urging other nonprofits to join in. Our state and nonprofit sector have lost a giant.”

From the multiple testimonials and memorials that have been posted all over social media and her her alma mater, Bennett College, we can all learn so much about the life she lived. I took some time since she passed to go to these various sites to learn more about her lived experiences as shared by those who knew her well and loved her so much. She covered a lot of ground, achieved greatness in the work she did, and her legacy should live on.

I was fortunate to have known Andrea as a professional colleague, meeting her in my early years in community development work. I would have been more blessed to have known her more closely as a personal friend, and to all those who did, I can only express my sympathy for their loss.

There have been so many words that have been used to describe Andrea. When I think of her, I would add another. She was a truth teller. She had a way of bringing the essential elements of an issue to the fore, speaking the truth with a sense of justice, always with a personal presence that conveyed her compassion. She believed that all should be treated with respect and given the dignity of their personhood. When I first met her, I felt the warmth of her smile and appreciated the twinkle that was in her eye as she talked about the things and the people who mattered to her. She lived her values.

She believed in people and committed herself to those causes and organizations that advanced economic equity and inclusion. When I first met her, she and other African American leaders were putting North Carolina on the map for their work in community economic development. They were the early organizers and founders of community economic development organizations and statewide advocacy agencies. Through her and with so many others who advanced housing and business ownership opportunities for all, lives were changed, communities were uplifted, and people across racial and economic differences found common ground. Progress was made.

While small in stature, she was a positive force that wielded broad influence in her community and in our state over her lifetime. Dr. Andrea Harris’ life and death was recognized by Governor Roy Cooper in his request that our flag be flown at half-mast in her honor. The NC Department of Administration stated, “Governor Roy Cooper today ordered all North Carolina flags at state facilities to be lowered to half-staff on Thursday, May 21, 2020 until sunset Saturday, May 23, 2020 in honor of North Carolina Civil Rights Activist, Andrea Harris, who was a trailblazer for historically underutilized businesses.” It was the right and fitting thing to do.

We might feel that a light has dimmed; but only for a moment. Her life light was too bright to be vanquished in her transition to her next life. She brought a spirit that will live on as her legacy is remembered and her example is followed. Across the state and the country, Dr. Harris is being recognized for the work she did to advance the lives of others. Let us go forward together, with all the light she cast for many to follow, to carry this light in her memory, with love.