Ivan Canada is deeply and personally devoted to his organization's mission to build communities free of bias, bigotry, and racism by promoting understanding and respect among people of all cultures, races, and religions.

"I grew up being involved in social change and community building work from an early age (due to my family and my doer personality), and it just became an important part of my identity. It wasn’t until my late 20's that I realized that I could take my interest in volunteering and making a difference and turn it into a fulfilling career option. Since then, I’ve enjoyed being able to play a role in helping to make communities stronger, more inclusive with some incredible organizations." 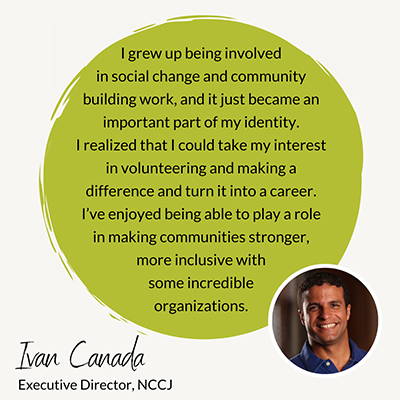 Ivan is the executive director of The National Conference for Community and Justice of the Piedmont Triad. Before this appointment, he served as the organization's senior director of development, communications, and strategic partnerships. NCCJ is a human relations organization that promotes understanding and respect among all cultures, races, and religions through advocacy, education, and dialogue. Prior to joining the NCCJ staff, he worked with Guilford Green Foundation as interim executive director and director of special projects.

Ivan is a leader in the Triad community and has been awarded the Triad Business Journal “Forty Leaders Under 40 Award” as well as their inaugural “Leaders in Diversity Award”, the Greensboro Chamber of Commerce “Change Agent Award” and most recently, the Latino Community Coalition of Guilford County “Corazón Latino Award” (Latino Heart), which recognizes non-Latino community members, businesses, and nonprofit organizations that have consistently served as an ally to the Latinx community. He has also been recognized with the Southerners on New Ground (SONG) “Road Opener Award” (2012), Guilford Green Foundation “Distinguished Service Award” (2013), and the “Activist Award” from Emerging Practitioners of Philanthropy (EPIP).

He serves on the boards of the North Carolina Center for Nonprofits, The Greensboro Chamber of Commerce, Equality North Carolina, and SJ Edwards Foundation, a local family foundation. Ivan is a member of the University of North Carolina at Greensboro’s Board of Visitors, and has served on numerous other boards and committees over the past fifteen years, including the board of the Young Nonprofit Professionals Network (YNPN) as National Board Co-Chair for 2017 and 2018. He most recently completed Independent Sector’s American Express NGen Fellows Program for emerging nonprofit and philanthropic leaders.

Ivan is a graduate of the University of North Carolina at Chapel Hill with a bachelors degree in economics and journalism and mass communication.