"I believe the major reasons I do this work is due to my early upbringing of values taught to me by my family and community. My Grandmother who raised me was a praying woman of faith who instilled values of wanting for others what I wanted for myself, striving to be the best you can be, and working hard and preparing yourself for success. These principles and values were reinforced by the church and community, and I am both driven and guided by the values of Justice, Freedom, and Equality for all." 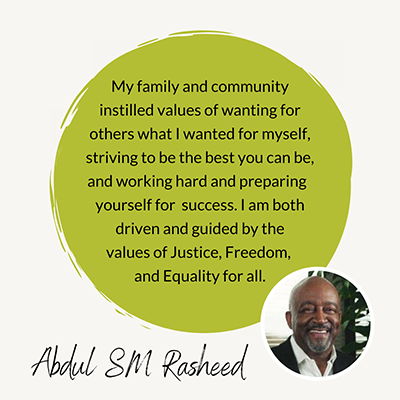 Currently, Abdul serves as Senior Advisor to the board and the CEO of Franklin-Vance-Warren Opportunity. He has been with the agency for 3 years. FVWOPP, Inc. is a $9 million community action agency serving four counties. In 2016-17, Abdul served as CEO of WildAcres Leadership Initiative and its signature program, William C. Friday Fellowship for Human Relations. From 2014-16, Abdul served as interim CEO of the Center for Leadership Innovation, managing the signature Bank of America-Neighborhood Leadership Initiative, a national Grant and Leadership development program for nonprofits.

For over 20 years, Abdul hosted and conferred with delegations from six continents, studying the model and work of the Community Development Initiative. He has been a sought-after speaker and served on local and national boards. Abdul has served as chairs of the Richmond Federal Reserve Regional Advisory Board, Federal Home Loan Bank of Atlanta, Center for Community Self Help (Self Help Credit Union), NC Housing Trust Fund, and past chair of Elizabeth City State University Board of Trustees. He also served on the original State Farm Insurance National Bank Advisory Board.

Abdul currently serves as chairman of the Vance-Granville Community College Board of Trustees; a board member of the National Center on Black Aging, Washington, DC, Kerr-Tar Area Regional Development Corporation (Vance, Franklin, Granville, and Warren), and Gateway Community Development Corporation; board member elect of the Andrea Harris Foundation; and past president and board member of ECSU Foundation and ECSU National Alumni Association. He is a trustee emeritus at Elizabeth City State University and a board member emeritus at NC State's Emerging Issues Forum.

While a student at Elizabeth City State University, Abdul was a member of the ECSU CIAA 1969 Championship basketball team and a proud member of Groove Phi Groove Social Fellowship, Inc.
He holds an Honorary Doctorate from Livingstone College; a BS in basic business from ECSU; MED in counseling and personnel services from Trenton State University; MS in community economic development from Southern New Hampshire University; and is a graduate of the Senior Executive Management Program of the John F. Kennedy School Harvard University.

In 2017, Governor Roy Cooper appointed Abdul to the NC Rural Infrastructure Authority, a funding and investment system to support economic development, building reuse, and other economic interests throughout the state. While fully committed, Abdul still finds time to coach a youth basketball team of 10-12 year olds in the local recreation basketball league.

He has traveled extensively throughout the US, Caribbean, Europe, Africa, and Mexico, and was the guest of the National Conference of Black Housing Developers in Manchester, England to advise on housing development for low income communities.

Abdul lives in Henderson and is married to Marolyn. They are the proud parents of five, with seven grandchildren.